Fear and Loathing in Reno 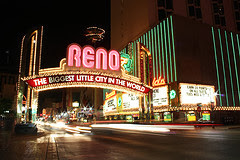 is a benjo ditch filled with drunken cabbies, ugly prostitutes and ignorant bartenders. It’s a
shallow grave dug especially by, and for, two-bit pimps, wanna-be players and degenerate gamblers. It’s a last stop for drop-outs, quitters and the outcast. What the fuck happened to these people? They’ve given up trying to get it on with the American Dream. Hell, most of these fuckers never even made it to first base. Now they’re barely content to masturbate to it as they watch it from an abandoned doorway. They’re all desperate and doomed and I can’t help wonder what sliver of hope they still possessed when they decided to make Reno their home instead of swallowing the black metal end of a really long shotgun and pulling the trigger with their toes. But, of course, it’s got its downside too…

On Friday afternoon, Allen, Khan, Neil and I piled into Allen’s Subaru Outback as he pointed the Pleiades star cluster north toward , and then east on the road paved with good intentions toward .

This was the start of our annual Booza Palooza road trip.

Each year, my friends and I choose a different drinking destination. This year, we chose to make a pilgrimage to the unholy mecca. It was our journey into the land of fuck-ups and losers. Whoever said “if you can’t beat ‘em, join ‘em” must have been some sort of a fucking communist. We would never join them. We were there to drink their booze - it’s the one thing in which doesn’t have a shortage. We were being lowered into their diamond mine and we were bringing our own pick axes.

Our plan was to take for everything it had; we would rape the city and burn all bridges behind us. For fuck sake, this was Booza Palooza!

After a five-hour drive, we arrived at the Silver Legacy Hotel and Casino. It was 8:45 P.M. and we were immediately struck by the smell of cigarette smoke and the sound of money and laughter and screaming and the overwhelming feeling of madness in the air. It was all around us and we fully understood there would be trouble to be found, problems that we would cause and, most importantly, a good time to be had.

We also knew that we would not be able to tame the numinous nature of the ethyl. At some point in our lives, we had all tried and failed. It can be as unpredictable and feral as spilled mercury. So, instead, we would simply put our faith in it and let it guide us. We would bow and agree to its terms.

It wasn’t for us to understand or even define. Our plan was to accomplish all things through the magic of grain alcohol.

“Let the drinking begin,” Allen proclaimed as we all downed our first cocktail. Mine was good. A perfectly constructed Jameson and Soda. It went down well and I started ordering one after another.

Oh, what a sea of booze lie before us. It was striking, and majestic, and vast. Usually, I like to stick my toe in with a cold Guinness or two and wade in at an even pace with gin or rum or whiskey until there is no turning back. But on this day I ran right in and dove headfirst into the first large wave I could find.

There was talk of going out to dinner as a group. “Fuck that,” I told them. “I’ll get a hot dog or something later. Right now, I’m ready to drink.”

Khan insisted that is was the right thing to do and described the benefits of starting a big night of drinking after a good meal. He had a point. Fortifying ourselves with food would increase our stamina. I finally agreed and we all headed to the Hash House A Go Go restaurant at Harrah’s.

It was the longest meal in my life. It felt like I was six-years-old on Christmas morning and I was being forced to sit through a huge breakfast before running into the den to see what Santa left.

We had all decided to go in search of the best Irish pub in . The internet gave two-thumbs-up to Foley’s, Ole Bridge Pub, and several other local bars.

We took a cab several miles south on to Foley’s, but were immediately disappointed.

It was a sterile cookie-cutter chain-restaurant-looking place. The staff was courteous and responsive but there was a family with little kids celebrating a birthday party for one of the children. What kind of savage actively plans to get drunk around a bunch of kids? We all knew what would happen and it would not end well. So we downed our Guinness and immediately walked outside to hail another cab.

We followed our list to a couple more places and were disappointed at each stop. We may as well have just gone to Applebee’s, for fuck sake.

Our final stop of the evening was to be the Ole Bridge Pub, but the slightly inebriated cab driver didn’t know how to get there. So, he dropped us off about a block away and made us walk around until we found it. Once inside, we met a really stupid bartender who was not interested in making drinks or dealing with customers. There were a total of six people in the place, but even that volume pushed her past the limits of her abilities.
Still, we stayed for several pints and a couple of cocktails and a few shots. We even played a dice game where, by rolling, it was determined who would choose a drink, who would pay for the drink and who would drink the drink.

A poorly constructed Long Island Iced Tea put me over the top.

“Fuck you! Hey bartender, fuck off! You fucking cunt!” Jesus! Did I SAY that? Or just think it? Was I talking? Did they hear me? I glanced over at my buddies, who seemed oblivious. Time to move on.

At some point after Friday turned into Saturday, we made our way back to The Silver Legacy where we continued to drink as we posted up at a five dollar Blackjack table. I can’t recall any details except for a conversation with one of the dealers. She was young and friendly and had absolutely no idea what to make of us. For some reason, the subject of Gingers came up and she informed us that she had siblings who were redheads with freckles. We informed her that Gingers are the result of anal sex, are sub-human and cannot be trusted. She may have agreed. I have no fucking idea and I didn’t give a shit what she thought. The only thing I knew for sure was that we were not physically ejected from the casino. And for that, I am slightly disappointed.

I have no idea what time I went back to my room, or if I even went on my own power. What I do know is that I was rooming with Allen and he came in at some time after me. It could have been five minutes, or maybe five hours. Either way I remember hearing him fumble and stumble into the room.

“Shut the fuck up, I’m sleeping,” I yelled into the darkness.

He didn’t seem to hear me or care one way or another. He began whistling the tune to Gilligan’s as he climbed into his bed on the other side of the room. We both laughed like lunatics before fading to sleep.

Allan has never been able to accept the notion - often espoused by members of AA - that you can have just as much fun undrunk as you can drunk. And, clearly, neither have I.

Somehow, we were all up and ready for round two by noon on Saturday.

We agreed that a good portion of Friday evening had been wasted due to our plan to follow the recommendations found on social media. The top-rated bars turned out to be terrible. So for the rest of the day, we would pick the worst-rated bars and go from there.
We piled into a cab and started our expedition.

Our first stop was at Ryan’s Bar and Grill. What a fantastically shitty little place. The bartender, Pete, was a middle aged guy with a bad case of the hangover shakes. Neil bought the first round. Four Guinness. The bartender rang up the order and we were shocked that the grand total was only $10. Great prices! Khan took advantage of this and bought the next round by announcing “I want to buy a round for everyone in the place!” I looked around and noticed that there were only five people in the entire place, including Shaky Pete.

We had several more rounds before moving on.

We hit a couple of other bars before we got to Filthy McNasty’s, which was chosen based on a Yelp review that started with “This place was awful,” and ended with “STAY AWAY FROM THIS PLACE!”

Filthy McNasty’s was exactly what we were looking for. It was filled with about a dozen locals who looked like a collection of off-duty hookers, low-level drug dealers, and a few burned-out dudes who resembled Nick Nolte's mugshot. They also allowed smoking, they had dice cups and a pool table, and the bartender was drunk. Our reverse engineering plan was working perfectly.

We even noticed a large hook hanging down from the ceiling in the center of the room with what appeared to be splattered blood on the ceiling itself. We resolved that the hook must be there to hold a Chinese Fuck Basket and that the blood stains were an accepted consequence of its use.

We started off with a round of reasonably cold Guinness and quickly recognized that undrunk people drink good beer and drunk people don’t give a shit. So we switched to cocktails and continued through the night.

As we moved from bar to bar, we encountered a variety of personalities. Some were affable and happy we were there and others were cautious. I’m sure they whispered to each other “Who do these assholes think they are, coming in here like they own the fucking place?” So, we found that it’s best to be as confident as possible. If we were preparing to go up against the enemy, on their own turf, we couldn’t show any sign of weakness. If they smell it – and they always do - the result will not be favorable to us. We entered every room with the confidence and swagger that’s usually afforded only to celebrities. We had no time for lines, limits or to fuck around with slow service. We were there to drink and the rest of the world was there to serve us.

That, I think, was the point of our pilgrimage. It was an overwhelming sense of inevitable victory over the forces of undrunkenness. Our spirit was able to prevail. We started with enormous momentum and coasted when we lost our steam. The brake lines had been cut and there was no point in steering. Captain Morgan was driving and we trusted him.
In the end, I thought it might be possible to stand atop the mountain, just above Donner Pass and survey the vast wasteland that is . With a discerning eye, one would be able to make out the scorched earth left behind by us as we advanced through, and later withdrew from, enemy territory. But as I am able to reflect back on this journey, I realize that we barely made a dent in the city-wide inventory closet of booze. The city is still standing and awaiting our return.

Colin Deal spends his free time exploring the bar culture of cities throughout North America and believes the unique culture of any region in the world can be discovered over a few drinks with the locals. His drunken musings can be found on Twitter here.