I’m so lucky people can’t hear what I’m thinking. I’m at the Bull’s Feather Pub with Scott, imbibing and partaking in a pre-recorded hockey game that glows from televisions posted around the bar. The Stanley Cup finals. The Smogtown Orcs are on the ice with the Schlepville Goons, chasing rubbers around the ice and colliding with each other in their frenzied zeal. Our three-layer masks sit on the table beside our phones, which lay face down out of respect for present company. We have allowance to breathe unhindered because we are eating and drinking. Our droplets are safe because they are laced with alcohol and cajun spices.

The Goons are getting their floors mopped, or something like that. Ice chips flail somewhere and I’m so lucky no one can hear what I’m thinking. Five beer, four beer, three beer, two. I am enjoying the way the beers go down tonight; the way the vapours are rising to my face, levitating my head. I’m high as a kite, and I say so to Scott. He laughs and says he can see that. My best friend. He knows my subtle nuances. He knows which way the wind blows through my ears. Too far north for the comfort of horse latitudes, there’s a nor’easter brewing off my continental shelf right now. I look around at the patrons and I can almost detect the fragrance of gangrene wafting from their mouths. Winos and bros, incontinent apes slackjaw agape at the screen, another glop of grog, another pull of adam’s apples and a carbonated chorus of uplifted burps.

Scott and I are high school teachers. Scott teaches junior math and I teach senior geography. Yeah, it’s been a tough week. The kids don’t get it. We’ve been mandated to ensure they keep their distance, stay the course and sanitize their hands at every passing opportunity. Trouble is, to put it simply, they don’t. It’s a never ending fight against the feedbaggers, the Van Goghs and the descendants of Kilroy. Stupid pubescent fucks. To watch them carry on, so shallow and feral, I really do worry for the future of mankind. Sometimes, on days like this one, when my classroom was crowded with jaded, procrastinating, social-distance-violating students who are only there to socialize, I truly just want to check out. When the boys in the back only aim to make each other laugh at whatever stupid things they can think of, I wish I could throw a book at them and scare them into some actual critical thought. In a few close years, they will go out and vote, procreate and unwittingly effect the slant of culture and society. The mould from which the future will be cast, they are. Dear god, help us. Society will be theirs and they won’t know what the fuck to do with it, except clamour for more beer and tits. They will wait impatiently for the next trend for them to emulate. They’ll feed from the trough of pop manufacturing and consume rather than innovate.

A table near us gets their order of beer and I catch one of that party raising his glass full of piss-coloured fizz, gasping in mock horror.

He doesn’t catch my death stare.

“Can you believe that shit?” I say, projecting my voice because I want it to be a megaphone at a rally whose cause I oppose. Scott giggles nervously and looks down at his drink.

Another beer. I haven’t had enough. I still feel the same. Somewhere down there, the little fucker is hiding, trying not to drown, that little niggling ball of anxiety. I’m going to dilute him until he tastes like rotten barley and I get to burp out his last breath. He’s an agile little fucker. I need to drop ballast so I can get a clearer shot at my quarry, so come what may. Automated Operating Mechanism Unknown, here goes.

“I’m sorry, but I really hate people, yanno? The human race is so buried in the thinnest layer of thought, the most superficial stratus of reality, that we don’t even know we’re choking ourselves out of existence. And we have this virus happening right now and people have their heads so far up their adolescent super-invincibility summations, they think they will never get infected, like there’s either nothing happening or the fucking world is gonna end. And I fucking wish it would, man. I really do. Fucking end it all. I’m so fucking done with it.”

Scott is sitting across from me blinking as if he has the wind blowing in his face. Around him, I realize that the din of the place has fallen a bit, in much the same way birds stop singing when a predator enters the area.

I look around and there is a forest of eyes in here blooming from stern faces. Sidelong shadows and tight corners of mouths. I have an audience. Let’s tweak them and see what sounds I can evoke.

“No but seriously. Our biggest source of information is the fucking internet, where every mouth-breather with at least two fingers is a fucking pundit. The information superhighway that taught us that the Earth is flat after all. I mean just look at the clientele in this place alone and you can tell humanity is going back onto its knuckles.”

“Sorry folks, ya. I’m being heavy, man. But seriously, man. We got this dumbass over here that has to make a big deal out of having a fucking Corona and he has to make a big fucking asshat joke out of it while a million fucking people have already died from it. Fucking David Letterman over there has to use it for his sitdown standup routine farting out of his mouth and it makes me wish humanity would just Cobain themselves and get it over with. Fucking ratlickers think it’s funny to joke about a fucking pandemic, then jesusfuck, everything is up for grabs I guess, eh? Yanno?  Like, take us now, we fucking deserve it.”

Scott is my best friend and he knows enough to protect me when the world is glaring at me for pissing in their watering hole. We put our jackets and suffocating masks on to exit a bar lit with the glare of eyeballs and I feel like I am in a bad trip through the Enchanted Forest, gnomes and trolls waiting to tint my Snow White with a little internal scarlet stoppage. We walk down the street and he lets me talk, though I have to admit that the thrill is gone without the reactive audience, and his passive indulgence is really draining the charge of my misanthropic rage. I could turn to him and tell him I love him, but I know what a drunkard’s cliché that is, so I avoid slipping on that sentiment. I do love him though and because I love him, I fall silent as we walk. The night is so cold I can see still my breath coming through my mask. After a while, my mask becomes so damp from condensation, it feels heavy and I swear I hear a crackle of bubbles as I breathe through. After a while, each step brings my anger closer to a shoreline, where the gradient banks of home finally rub brusquely beneath my feet. I stand at the front door of my apartment building, placated and exhausted.

“You sure you’re okay?” asks Scott. I don’t remember him asking me that question previously but still, I nod wearily. Scott offers his hand for a soulshake and we bump chests. He pats me on the back firmly while we hug, making me exhale a little ‘huh-huh” involuntarily, then he heads back down the street to walk the long walk back to the bar to retrieve his car. Once he’s far enough away, he peels off his facemask. I realize I can too, and when I do, I can breathe and I realize I’m alone. 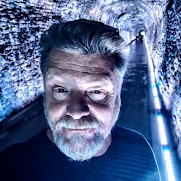 Kees Kapteyn has a published chapbook entitled 'Temperance Ave.' through Grey Borders Books as well as having been published in such magazines as Blank Spaces, Wordbusker, Writing Raw, In My Bed, blue skies, ditch and various other publications. Most recently, his short fiction “Geosmin” was accepted into the Just Words 4 anthology published by Alanna Rusnak Publishing.
Kees was raised in Niagara-on-the-Lake, Ontario, and now lives in Ottawa, Ontario, Canada where he works as an educational assistant.