Mergansers look like loons but not really. Late on summer afternoons when the sun appears dusty from a long hot day in the sky and the jet skis have all been put away so the madmen who race the engines that sound like mosquitoes first thing in the morning, roaring up and down past the cottage, go out and eat their dinner at one of the few restaurants in the area and then drive home drunk and knock over deer and foxes on the highway, maybe a porcupine and a few skunks, a parade of mergansers floats past the dock. I pretend I’m asleep. I want to make them think I don’t notice them. But I do.

A merganser is like a loon but it is a bit more interesting. It has a red crest because it saw a similar crest on a kingfisher and though he could look like that bird, though it just looks goofy on the lesser bird. A merganser doesn’t make irritating, haunted sounds on foggy mornings when the water is still. It doesn’t want to bother anyone. It just wants to look after its kids until they are old enough to have friends down the lake who are around the bend. It is the males who lead their merganserlings in a parade to the nest. Don’t ask where the mother merganser is or the teenage daughter they hatched together. I don’t know where the females are. My wife is friends with the local Avon lady and she helps her unpack her wares and my daughter has friends out there somewhere she says she can only get to in the runabout that came with the cottage rental. They disappear in what amounts to a Bermuda Triangle of invisibility so I pretend I am invisible, too, and pull my green brimmed Coast Spotter’s hat over my forehead, fold my arms in front of me as the merganser and the little merganserlings paddle past, and sit very still.

I identify with the merganser. He also has red hair although his looks as awkward on him as mine does or did on me before it went to find my life. My wife says I dwell on the future too much. The merganser also never lets on he is seen or being seen. I call that focus. Maybe self-discipline. Or maybe it’s just because he’s on vacation and doesn’t want to be bothered by stuff. The parade of mergansers swings close to the dock because I know he is teaching his offspring how to be curious while remaining safe. Loons don’t do that. They stay far away. They are cowards preened in their own image, a kind of fashion-conscious bird that poses for the camera in a society page, and they probably don’t bring a cooler of beer down to the dock with them late on a summer afternoon. I think mergansers likely drink beer when they think no one is watching. They have that ‘I’m still here but I’m chill with all this lake stuff’ attitude that comes after the sixth or seventh empty goes back into the cooler.

This merganser guy is protective. Where’s his wife? Does she want him to start the barbecue? He probably laid in steaks for dinner and they’re sitting in the darkness of the cottage refrigerator and calling out for him – ‘Moo, moo, I’m here and I’m waiting and I bet you are hungry.’ But the merganser is responsible for his brood so he’s not about to leave the cottage unlocked and go look for everyone. He never leaves a chick behind. Every now and then he glances over this shoulder. He makes sure the kids are all there. He won’t leave any of his brood behind.

My guess is that he works hard all year just for a handful of those days when, around five o’clock, everything stands still, including the kingfishers who, by rights, should be competing with the mergansers for the fish that stock the lake. But the kingfisher realizes the guy works hard and has mouths to feed, and I bet he flies to another lake – there are lakes everywhere – picks up some fish and leaves them where the mergansers will find them. That’s kind of nice of the kingfisher. He didn’t have to do that. The little mergansers turn to their father and say, ‘Hey, look Dad! Fish! Let’s have fish for dinner.’ And he doesn’t have to fry it. I think mergansers would be overjoyed to find a sushi restaurant, perhaps order a couple plates of sashimi, and then drive home sober as a church mouse on the cottage country roads. No deer or foxes would be killed in the making of the day.

I say this because there comes a time in a merganser’s life when he realizes loons are going to get all the credit for being lake birds and the merganser will have to raise his little flock with the awareness that the big time action, the thrill of being seen and becoming icons of some social milieu that didn’t invite him, won’t happen for him or for them. They have to settle for being mergansers. They won’t dive out of sight like celebrities pursued by paparazzi and they won’t grow up full of themselves. They won’t be daunted by who they are – second place in the pecking order. Why should they? They do their own thing. Mergansers don’t need others to notice them or tell them if they are important or not. Mergansers probably have a call, though I can’t say I’ve heard the lonely call of a merganser and it summed up the illusion of a crowded vacation region as a place of solitude and spiritual mystery. There are no revelations or spiritual moments of insight associated with a merganser.

The merganser’s world is what it is. There’s water. They go for a swim. There’s air. They’ll learn how to fly. The merganser isn’t told he has to reschedule his vacation weeks because the new guy on the sales team really, really, has to visit Bermuda because he’s already paid for the flight and the beachfront hotel suite with a jacuzzi in the corner of the room for he and his girlfriend or some other place the merganser can’t afford. He just says, ‘Fine,’ and throws himself on the mercy of the people who own his summer rental and, because he’s a merganser and hasn’t asked for anything before, this once, just this once, yes they can do him a favor although the two weeks will only be a week and a half because they have cousins coming from Cincinnati.

And after the parade passes there are dragonflies that circle and dart above the water. There are even more of them along the shoreline. Mosquitoes are everywhere. They are the hard part of a vacation. They don’t like mergansers and they leave one itching all night because the drugstore in the nearest town fifteen miles away just sold the last tube, ‘Sorry.’ The dragonflies, some blue, some yellow, some a sort of silvery gold, are having a field day and eating their body weight in the little blood suckers every ten minutes. They look like the Battle of Britain. Good for them. Do you think the kingfisher will help them, perhaps pick off some of the slow-moving members of the evil little Luftwaffe squadron of useless blood-sucking insects? No. The kingfisher shrugs. He knows he should do something about the mosquitoes but he’s waiting for a fish.

His royal red crested, blue feathered whatever he calls the top of his head, is waiting for that one moment when a nice, big, juicy lake trout or maybe a salmon that found its way up the channel will come just that little bit too close to the surface and he’ll pounce like a dive bomber and he’ll leave a portion of his grand dinner near the merganser’s nest because he knows his fellow bird has a lot of mouths to feed and because he’s already king sitting up there on the hydro wire and he doesn’t have anything to prove, unlike the merganser who knows he wants more out of life but realizes just raising his kids, just showing them the ins and outs of the shoreline and teaching them how to survive and be good birds is his calling even if his daughter and wife don’t come home until its too late to barbecue and he’s already eaten a bowl of Cornflakes and called it a night. 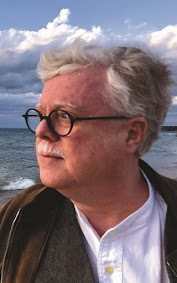 Bruce Meyer is the author of books of poetry, short stories, flash fiction, and non-fiction. His stories have won or been shortlisted for numerous national and international prizes.