In Which I Jump Off the Right Train

I’ve walked too many hundred

miles in those shoes. Talked too much,

and thought too little, and been unreasonable,

and half right, till it cost me. Like the night

from his flat to the Gare du Nord, which was the last time

for a while in my life I was that drunk. And we had no excuse, even if

it was Mike’s birthday, even if we were 22 and single and in Paris,

and the seedy fleshpot funfair of Pigalle

with fire swallowers, and sweet

talkers, and the up for anything likes of us.

Picture two beersteins big as the Ritz! Check out this bar

where a Turk is propositioning us in tandem, as a melancholy pimp

sips pastis and spits and mutters. (Why do whores become

whores? I ask him, so young, so baffled by the world.

Because, he answers, keeping it simple for me, women are cunts.)

And to the next bar, and the next—every next drink a dare, a double

harder and harder to get through! And at four a.m., almost home,

hands in their pockets to make out that they're knives!

And when we laugh, and let them swipe our last few

centimes, they'll shake our hands to thank us!

nor how, nor how much I sobered in between, but I know

by Sunday evening I was sick of it, sick of the swish of alcohol

and the gusts of adrenaline, sick of slumming, sick of the sour

blaze each swig of glee went down with. Besides,

I’d an 8 a.m. class to teach on Monday, a hundred miles away,

in Lille, on Future Shock by Toffler to some kids in terminale.

So when Mike scoffed and cackled, saying I’d never

make it to the station, I bet back I would,

and I marched unreasonably out his door in circles.

Somewhere in those hours there was a Métro train, I recall the

one long, sardonic clap... When I

jerked awake, the train was at the station, I leapt onto the platform,

I’d just jumped off of bucked into grunts and clattered off.

The way, abandoning us, a life we've lucked into

wakes us to to admire it. The thumbed nose,

Voilà, the porter chuckled, you've just jumped off it. So I was

half right, and I had made it, though it did cost me, one cold snooze

in the waiting room, one bruise from a police boot, one night of

retching in a cheap hotel. But at 5 a.m. there came

another train, another right one,

that brought me somewhere else a hundred miles away,

somewhere where the stars were being leached clean in a smear of smog,

my own small cozy world I could pick my way through brain-dead,

where I would never do it again. Land of the reasonable

other half, where I took a careful

breath and got off easy. 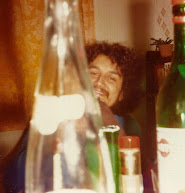