The Back of the Drawer

The room is a cluttered nest. The bed surrounded by cartons open and closed, piles of clothes stacked and toppled. Chairs occupied with slouching dresses, skirts, shirts, and pants clinging to hangars. The closets abandoned except for shoes, some boxed others hanging, a broken rainbow of colors. A mess, according to Carol. The price of moving after twenty-five years of accumulation. The worn and unworn awaiting a verdict to be kept or discarded. Good willed to some group with good intentions or packed to continue life as they had known.

Carol hears her husband Mark trudging up the stairs. If he had been born an Indian, they would not have named him Lightfoot. “Mark!” Carol’s exasperation a trumpet call to action. “You need to go through this stuff.”

Mark saunters into the room. “So you’ve said.”

“For the umpteenth time.”

Mark turns and goes in the bathroom and is greeted by more boxes and his wife’s menagerie of cosmetics, lotions, tweezers, scissors, a sundry of things for her hair and bottles of mystery to him.

“Do you ever empty any of these bottles?”

“What could you possibly do with all this?”

“What is that supposed to mean?”

“It means who needs more than three lipsticks?”

“All women who want to look good. To please the man in their life.”

“Oh. I guess I never knew what it took to please me.” Mark picks up a bottle and reads the label. He puts the bottle down, shakes his head and mumbles, “I’m so pleased.”

“What did you say? I couldn’t hear you.”

“I said the pleasure is mine.”

Carol walks into the bathroom, stops, and puts her hands on her hips. “No you didn’t.”

“Say the pleasure is mine.”

Carol eyes him like a cat watching a mouse absorbed in a piece of cheese. Her finger comes up and she signals follow me. She pivots back to the room and steps through the valley of cartons and clothes. She stops before a tower of t-shirts, turns, and faces Mark.

“These you have kept hidden in the back of the drawer for, oh, more than twenty years. You don’t need any, much less three.”

“These were history in the making.”

“Those who ignore history repeat it.”

“What part of life are you going to repeat without this t-shirt?”

“I’m not going to repeat it. That’s the point.” Mark reaches out and delicately pulls the t-shirt from Carol’s grasp. “That one point in life that stays with you, glued to the underside your skin.”

“What an awful image.” Carol rotates around to the leaning tower of t-shirts and picks one off the top. She snaps the folded shirt open in a flourish. “So. Chances R. If I remember correctly that was a generation ago. A bar. And you worked there. Are you going back there if I throw this out? Going to repeat history? Get drunk at work? Pick up drunk girls?”

“No. Obviously. I kept it so I don’t forget. Don’t forget the one point in life when I was alive. When I actually played the game. Now I sit on the bench. A voyeur.”

“You know what I mean.” Mark reaches around Carol attempting to seize more of the shirts, but Carol moves and the tower tumbles into a pile of cloth debris. She reaches down and pulls a bowling shirt from the wreckage.

“Oh. This is something you need. We’ve never bowled. And who the hell is Kahuna?”

“It was a nickname.”

“What kind of a nickname is that? What does it even mean?”

“It was a sign of respect. It meant you had balls. The balls to do things others wouldn’t.”

“They must have been bowling balls. I mean it’s a bowling shirt and yea, I could see you holding a bowling ball in both hands and your buddies saying—hey nice Kahuna.”

“Very funny.” Mark takes the shirt from her and flings it over his shoulder.

“Well I’m sure no one else hung on to theirs. You’re the one of a kind.”

Carol shakes her head and sits down on the pile. “Mister one of a kind. You realize that doesn’t necessarily equate with good?”

“I’ll settle for unique.” He reaches out his hand. “Get off my past.” Carol shakes her head again and takes his hand. “You realize you’re part of that past.”

“Not that part. I’ve never bowled.”

“That was just an episode. A chapter you didn’t appear in.”

“Maybe to you. But considering the only one reading is me. Exccccciting.”

Carol turns and swoops up as many of the shirts as she can, turns, and shoves them at Mark. “Go through them now or they go in the trash.”

Mark opens his arms as if giving a welcoming benediction and accepts the shirts. “There has to be something from that time you didn’t let go of. I’ll bet you have something lurking somewhere. That souvenir.”

“I do not. Hanging on to the past is a symptom of failure.”

“Failure to move on. Get over it. Let it go. The past is the past.”

“So no t-shirt? No letter? No piece of jewelry? No photograph tucked in the pages of a book? Nothing that symbolizes you were young once? That you did things you won’t do today?”

Carol looks into Mark’s eyes. Then she turns and picks up more of the tattered shirts off the floor and plops them on the pile in Mark’s arms. “No. I didn’t do things I wouldn’t do today.” She tries to squeeze between Mark, the bed, and the boxes.

Carol gives him a gentle push. “Positive.” And gets past him.

Mark spreads his arms, letting the clothes fall, and raises them towards the heavens. “Hard to believe. Such perfection. A true gem. Never a diamond in the rough.”

Carol gives him a pat on the butt. “A piece of pure gold.” A smile floods her face, she gives him a quick kiss, then she turns to leave the room.

Mark looks down and gives the pile a sweeping soccer kick. “He shoots! He scores!” Something catches his eye. He stares for a second. Then his hand dives to the pile and talons a t-shirt. He rises quickly, pivoting, and shoots his hand with the prey up in the air.

Carol looks over her shoulder. “What’s that?”

“Just another t-shirt, my dear.” Mark’s face fills with glory. His arms spring up in a V. “You remember this. Or. Perhaps you don’t?”

Carol comes up next to him and reaches for the shirt. Mark holds it beyond her reach then grasps the sleeves letting the stencil message flutter before her eyes. “Wow. You have that.”

“Yes, my dear. I have that. It. Proof you are iron pyrite. Fool’s gold!” He puts one arm around her and waves the t-shirt like a rally flag at a sporting event. “Let me take you back to that time, that place, when you didn’t do that sort of thing. That event. That chapter in the book you didn’t live. When you went for the story!”

“Going for the story was you, Mister Kahuna, not me.” Carol struggles like a small child to grab the shirt.

“You didn’t have the balls, but you had the mighty D’s!” Mark whips the shirt in the air, basking in the score.

“I was drunk.” Carol lunges for the shirt.

“Yes you were. That’s what happens when you go for the story.”

“Give that to me. It was mine not yours.”

“Ah. So you admit. At least once in your life you did something to remember!”

“I didn’t remember doing it the next day. Much less today.”

“You say I did. I don’t remember.” Carol leaps, leveraging herself against Mark and gets the t-shirt. Mark sits down on the bed. “This. Is going to the trash.” Carol swats Mark with the shirt. “A story that no one but you remembers comes to an end.” Carol turns and heads for the doorway.

Mark watches her victory lap then suddenly jerks as if fighting an unplanned nap. “They took photos. At the end. You were all lined up. You finished second.”

Carol stops and turns. “Only because the winner flashed the crowd.”

“You’ve got that photo. I’ll bet anything. You have it in that old photo album you’ve kept buried in the bottom of the closet.” Mark grabs a box and tears back the tape to open it.

“Don’t do that!” Carol runs over and shoves Mark away from the box. “Don’t make a mess of everything I’ve done.”

Carol presses on the tape attempting to reseal the box. “I’ve worked my ass off on this.” She looks at Mark. He is standing, nodding his head.

“That’s it isn’t it? Don’t make a mess of everything I’ve done.”

“What do you mean? I’ve worked hard packing up your life and mine. I don’t want it blown apart.”

“Right. Exactly right. You’re not Miss Perfect. And the photo album proves it. You’ve got it here. Somewhere. You didn’t throw it out. You didn’t let it go. Maybe you haven’t looked at it in twenty years, but you did the other day. Just before you packed it in one of these boxes.” Mark’s hand flutters in a flourish around the room. “It took five shots of tequila courage, but you went for the story. A sixth shot and you would have humbled the winner with a one better flash of your own. D’s versus B’s.”

“Another shot and I would have been puking.”

“You did that later. That’s the part you don’t remember. The day I met you. All I was good for was holding your hair up out of the mess you were making. And now you can’t admit it. It was a great story. The next day you had to ask one of your friends my name. And you admitted you barely remembered me.” Mark’s eyes started searching the room. “Fess up. That album is here somewhere.”

“If I say it’s here, will you let this go? Drop the whole thing?”

Mark straightens up rigid as a totem pole. “Only if you let me see what other memories you have stored away.”

Carol hesitates, sizing up Mark. “After the move.”

Mark takes Carol by the shoulders and gently maneuvers her to the bed. He takes her t-shirt from her and smooths it out on the bed. “Hey runner up, let’s go for the story.”

“I’m not flashing you. And no photos.”

“We’ll just hang on to this t-shirt.” 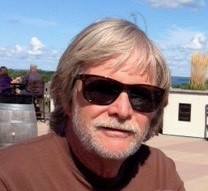