It was late 1952, and even though the lieutenant senior grade was stationed on a submarine out of Norfolk Naval Base, he preferred informality at the officer’s club.

“Whaddya got there, Cush?” asked the bartender, as the young officer strolled through the door. It was obviously a rhetorical question as the barkeep could see the seven-month-old resting in the crook of his customer’s arm.

“Got the son with me today,” he answered, taking a seat on a nearby barstool. Shifting the baby to a semi-sitting position on his thigh, he held the child up with one hand on his back and indicated “one”—for a draft—with the other. Drawing a beer off the tap, the bartender cocked his head toward the pair.

“Yup,” the young Naval officer answered. “Mother wanted to spend the day with some friends, and I figured, why not?”

Before their day started, his wife had written up a schedule for feeding and the food had been prepared. She also gave a quick lesson in changing the cloth diapers, the only option back then. Everything was in place and ready to go. He assured her that their son was in safe hands for the day. “Relax,” he told her. “What could go wrong?”

The rest of the morning went well. The first-time father played with the infant, fed him, changed him, played with him some more. Then, around mid-afternoon, he decided to join in Happy Hour for a drink. Dressing the boy and placing him in the carriage, he departed for the base’s Officer’s club. He chose the bar because the barstools looked similar to the highchair at home. They weren’t the usual flat, round stools found in most drinking establishments. Instead, they each had an upholstered backrest which encircled about half the sitting area of the seat cushion.

Settling in, ready to imbibe, he propped the wobbling child into the stool beside him.

Who knows what was happening there at the time; the boy couldn’t have been too aware although the flashing lights and calliope-like sounds coming from pinball machines off to the side probably captured his attention. Meanwhile, his father got involved in conversation—perhaps with the bartender, perhaps with ant late-arriving fellow patrons. Rapt in his own world of drafts and jokes, he became distracted, which was when—whether because the baby lost his balance or just got overly-excited, he fell, asshole over elbows, crash-landing onto the floor.

A chorus of “holy shit” issued once the adults were reminded of the baby’s presence as the infant slammed on the wood floor, suddenly realized that pain was involved, and began screeching. Scooping the crying child up and fleeing the O-club to try and repair the damage, Lt. Cushing awaited the tirade certain to come from his wife once

she arrived home and saw the bruise that spread across the swelling cheek, closing up one eye.

All hell did break loose.

That was the last time my dad took me to a bar until my 18th birthday, when he took me for my first legal drink. It was while we sat on a pair of barstools in Patrick’s Pub, drinking a couple of Watney’s Red Barrel drafts, that I first heard of this event that marked my introduction to the world of distilled spirits. It might be safe to assume that what happened that day of my first year on earth explains a lot about me.

What was the takeaway from this experience? As far as I can figure, there are two—the first being that my first real injury in life happened in a bar.

After I fell off a barstool.

The second came to me decades later in an inebriated epiphany when I realized I just can’t seem to get it right. For some reason, I continue falling off barstools. 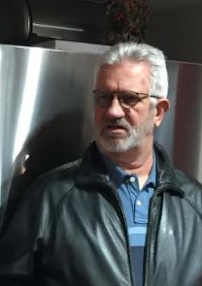 Bill Cushing lived in numerous states, the Virgin Islands and Puerto Rico before moving to California where he now resides with his wife and their son. As an undergrad, he was called the “blue collar” writer because of his time in the Navy and as a shipyard electrician. Earning an MFA, he retired in 2020 after teaching college for 23 years. His prose has appeared in print and online. Bill has three poetry books available, most recently...this just in...from Cyberwit. Bill’s current project is a memoir focused on his years aboard ships.