She thought she was totally cool, but I found her irresistible. Wild women always attract me. The red dress, and the sensuous way she was poured into it riveted my attention on her. I introduced myself, sitting down on the empty stool to her left, and flexed my tattoo. Insidiously, the booze was working its way to my brain. I said, "Did you see the sky turn scarlet at sunset?" The long slow pull she took of her whiskey put the diamond on her finger in front of my face, long enough for me to take notice. "That's a good one," she replied, "Yeah, I suppose you can sit here."

This could get ugly, I thought. That ring sent streaks of light flashing on my retinas while she talked. She kept asking questions and watching my reactions. She bought me another pint of stout. I'd been thinking of leaving, just saying good-bye and walking away, but I couldn't refuse. She asked me what I'd read lately, and I had to confess that all I'd read lately were the channel listings in TV Guide. She rattled off the titles of half a dozen books before I recognized one. I don't know why, but I didn't even try to fake it; I admitted I hadn't read it.

She asked me what I thought about putting a road through the petroglyphs. Did I think the Forest Service should log 600-year-old ponderosa pines in New Mexico? Did I think the new Governor had deliberately exceeded his authority in signing the Indian Gaming Compact? This is the hardest barroom mating ritual I've ever run across, I thought. I asked her if she'd ever watched Babylon-5 on TV, and she didn't know what that was. I tried to explain the show. "Oh," she said, "I don't care for science fiction; it's too predictable."

Frankie, the bartender and a damn good tattoo artist, put a bowl of pretzels in front of us, and Carmen excused herself to go pee. I grabbed a fistful of pretzels, and watched her walk away, totally absorbed in her walk. There was something elegant in the way she carried herself. Now's my chance to leave, I thought, popping pretzels in my mouth. That diamond ring on her finger mortified me. I thought about jealous husbands and six-foot-plus boyfriends. I thought about knife fights and gunshots, and quietly slipping out of back doors. Did I really want to do this? I gave it all too much thought, because she was already coming back. I heard her boots clicking on the wooden floor, and turned to see her adjusting her red cowboy hat, angling it slightly over one eye. She had the other eye on me. Well, what the hell, I thought, I'm a weak man, I went fishing for compliments from a barstool cowgirl.

I asked her if she liked my tattoo. "Yeah, I like it," she said, "It reminds me of the one my husband has on his butt." Well, there it was, the code word, husband, for "You're barking up the wrong tree; don't bother me," but she was certainly available. I didn't ask about the husband - perhaps I should have. If she wasn't going to talk about him, then why should I? I wanted to keep my cool, pretend I didn't care about husbands.

The truth was, I didn't really care about the whole institution of marriage; there was nothing sacred about it to me. I didn't know anyone, including either of my parents, who was still married.

However, I did remember the tall blond guy in the pickup, demanding to know if I was fucking his wife. I remembered the trucker waiting outside the bowling alley to avenge his dishonor. And I thought about the others, the guys who never knew what their wives or girlfriends did, the ones who fooled around with more than just me.

The band played a nice high energy electric country. I two-stepped with Carmen. We drank. We danced through two sets, and I asked her if she'd like to come home with me. "No," she said, and, "I have to go," she said, but, "Would you like to come to a party tomorrow night?" she said, finally. I told her I did, so she wrote down the address on the back of a deposit slip from her checkbook. I stashed the address in my wallet, stuck it in between two twenties I knew I wouldn't need right away, and walked her to her car. "Nice car," I said. It was a little green MG, low to the ground, dual carburetors, bucket seats. I was impressed. I kissed her before she got in the car. She wrapped her arms around me, and sucked my lip into her mouth. After just a few minutes of that, she poured herself into the seat. "I'll see you tomorrow night," she said, and the engine roared. She winked at me, and peeled out of the lot.

The party was rolling by the time I got there. I was late since I'd been at the bar all afternoon. The front door was open and I strolled in. Carmen saw me right away; she must have been watching the door. "Beer's in the fridge," she yelled at me, from the other side of the room. I didn't know who her husband was, or where he was, so I just waved at her, and grabbed a Mickey's Widemouth off the shelf from behind the Jack Daniels. Hmm, cold Jack Daniels, I wonder whose that is? I didn't have to wonder long, because Carmen was there before I could close the door. She grabbed that bottle and took a god-awfully-long swig, and then poured herself a tall glass neat.

She never said a word to me, just planted her lips, sticky with Jack Daniels, on mine. She tickled the base of my tongue and I forgot to breathe. My lips throbbed with waves of pleasure. My mind took a vacation. She squeezed her left arm under my right, and steered me somewhere. She pulled me into a room along the hallway from the kitchen, and closed the door. She snapped my buckle open, and yanked on my pants. I pulled away from her a moment to unbutton my shirt, and her dress was off - fell off of her like it was made to do that. Well, I won't bore you with the details, but when it was over, I was higher than a Carlsbad bat at sundown.

It was hard to get dressed after that, what with all the kissing each other’s lips and other parts, but we finally managed it, and as we kissed again, there was a knock on the door. Carmen turned the light out. Man, oh, man, that wasn't a good idea, I was thinking. "Carmen, are you in there?" I heard a man ask. Carmen didn't say anything. "He knows you're in here," I said. She turned the light back on, and the door opened. Sure enough, it was another tall one, blond, Aryan looking, at least six-foot-three. At five-eight, I'm impressed by that. He looked at Carmen, looked at me, spun on his left heel, and walked away. Carmen went after him. I went back to the party.

I danced with a pretty woman whose boyfriend glowered at me the whole time, and headed back to the kitchen, looking for something to eat. I found Carmen there. "We're leaving," she said. "Are you going to be alright?" I asked, feeling guilty, but admiring the way her clothes accented her body. "Oh, it'll be OK," she said, "We have to go home and talk," and she hurried out of the kitchen. I found a half-eaten enchilada casserole in the fridge, and wolfed that down like I hadn't eaten in days. Actually, I probably hadn't.

The next night, I went back to the bar. Frankie poured me a Guinness as soon as he saw me. "Well, what happened partner?" he asked, "Did you shack up with that pretty little filly you were with the other night?" "Yeah, I did," I said. "Well, how's come you're here now? You can't be tired of her already?" he asked, winking, as he wiped the bar around my glass. So I told him the whole story, and he asked what I was going to do now.

"You know, Frankie, I think I'm going to have you ink some clothes onto that Elvis tattoo." 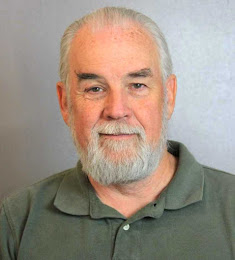 Terry Mulcahy worked as a technician in physics and biochemistry research labs, was President of his union local, poured bronze, worked for a Carnival, traveled the USA on a bicycle, made his own beer, worked for a winery for eight years, and currently works as a movie extra while studying acting. He blogs often, writes stories, slams poems, and hikes in the mountains. He’s got a lot of stories to tell, and this one is fiction, but based on a true adventure that landed him in Albuquerque, NM.