They have no memory of how or why they came here,

or of how long they've sat drinking.

(they know their names, but they forget which one of them is who)

Nudge, says Nock, have you ever known a moment's joy, or sense of purpose?

Ah! ah! says Nick. The first of those!

When old Gertie's skirts flew up around her, as she crossed the subway grate!

Nudge fails to recollect the knees.

He sighs. I wish I'd seen that.

Those knobbly knees, and how, as she went to clutch her skirts around her,

she tripped, and stumbled against the fire hydrant, and bashed her head.

The pages of a calendar flutter and settle about the room in flocks.

Up left, a tree: its limbs make growth spurts

Nudge, asks Nick, how long have we sat here drinking?

Since opening time, I imagine, Nudge and Nock answer in unison.

Hey! Nudge and Nock protest in unison, he was asking me!

Yes, they retort in unison, but he thought I was you!

Each plucks something blunt from a branch,

to bash the other one about the head, until the blood is prodigious.

But then a gong sounds!

until there they are, a guerilla, a hippy, and an existentialist in a bar— as suddenly, beautifully, with the red sky white with mushrooms,

Silence, for seventeen minutes, or until the last of the audience is gone.

Then, very gradually, in the formless void, up center,

by the light of a red-flashing sign, we see a door. 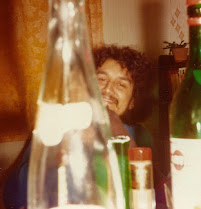