It was during my sophomore year at Ohio University when I first met her. Her name was Gay.

We were in the same sociology class and I couldn’t take my eyes off of her. She was a cute blond with a smile that lit up the room. When she laughed, she laughed hard. It was infectious. Everyone in her orbit laughed with her. She wasn’t a typical beauty, more like the girl next door who never realized how naturally pretty she really was. This, I think, made her that much more attractive. Back in my hometown of Brooklyn, she would be referred to as “Bubbly, bubbly like a bottle of recently uncorked Champagne. Not quite Dom Perignon, mind you, but a drinkable vintage nonetheless.”

For several weeks, I went out of my way to make small talk with her. I worked my way into study groups with her and even got to know her schedule so I could “accidentally” bump into her. To be honest, I was inexperienced with girls and really didn’t have the swagger and self confidence that afforded an average guy like me the ability to just ask her out. I quietly hoped for the perfect moment when I would be certain the feeling was mutual. That moment never came. Instead, it was Gay who made the first move. We were both invited to a party at another classmate’s apartment when she chose to sit next to me on the floor, next to the stereo. She was carrying two unopened cans of Stroh’s, handed me one and then plopped down, Indian style.

We talked for hours and were the last party guests to leave. But the night wasn’t over yet. We spent another couple of hours sharing a basket of french fries at an all-night diner, and then another hour standing between our cars in the parking lot. She was funny, smart, and the absolute coolest girl I had ever met. As the sun was coming up, we made plans to go out again.

“Give me your number and I’ll give you a proper call,” was my answer.

Within just a few days, we were inseparable. I really liked her. And I liked the way she made me feel. The connection I felt with her was something I had never experienced with any other girl before.

She was spontaneous and bold and exciting. At any moment, without any planning, we would find ourselves at a movie theater, or on the way to Columbus to see a concert, or at a random friend’s house party. It was at one of these parties that I met an old high school friend of hers. We were casually chatting when he referred to Gay as a “good time girl.” I knew what he meant, but didn’t ask questions. It didn’t matter to me. I liked her and wanted to do everything I could to show her a good time.

Apparently, I was not good enough. One night about two or three months into our relationship she let me know we were done. Finished. Broken up. As I look back, I always wonder if we ever started at all.

I was only 20-years-old. And up until that point, that short little relationship with Gay was the biggest and most important thing that had happened to me. I had no idea how to act or react. Was I supposed to simply chalk it up to a life experience? Tell myself there’s plenty more fish in the sea? Or, maybe dredge up another cliché designed to treat the wounds of the heart?

Nope. I decided to get drunk. Crippling drunk. Not off the 3.2 percent swill that Schlitz and Pabst called beer. I was going to get falling down drunk in a real bar. The only problem was that I was one year under the legal drinking age in the State of Ohio, and I didn’t have a phony ID. I knew the college bars wouldn’t serve me. There was no way they’d risk having their license suspended by serving a skinny underage kid like me. But I was determined. I suppose it wasn’t just about getting drunk. I needed this for me; I needed to prove to myself that I was as bold and exciting and spontaneous as Gay.

I remembered hearing about a townie bar that didn’t ask questions or check IDs. It was called the Union Bar, named for both its location and its blue-collar clientele.

I gathered up the mettle and walked through the big wooden door and into the dimly lit, smokey wonderland. What a beautiful place. The centerpiece was a beat-up bar lined with a half dozen empty stools. Hidden further in the darkness were four or five ratty booths occupied by hard looking men and harder looking women. I knew right away that I need to mind my own business and be respectful. I was the visiting team and didn’t yet know the field.

I swung a leg over a stool, planted my ass on the surprisingly soft cushion, and waited for the bartender.

“Waddya have?” he asked.

In my snarkiest Brooklyn voice, I replied “A shot of gin. Gordon’s if you got it.”

I held my breath, one leg nervously twitching in anticipation of the barkeep’s request for an ID. But the request never came. Instead, he turned his back, reached for the Gordon’s, plunked a glass on the bar and filled it with a shot of that clear, juniper-flavored nectar which I immediately downed.

I screwed up my courage. “Leave the bottle, okay?” I had seen that in movies and always dreamed of saying it myself.

I detected a slight upward arch of his eyebrows and a rolling of his eyes. When I assured him I had enough cash, he shrugged his shoulders and that was that.

Somewhere after six or seven shots I stopped. I asked him – actually slurred, – how much I owed. He told me, I fished a wad of bills from my pocket and tossed them onto the counter. Apparently, enough.

I staggered to my dorm, catapulted into bed, and awoke the next morning clear headed and remembering everything. A miracle, I thought, but one I won’t try again.

Years later when the internet arrived, I looked her up. I found several women with the same name and almost gave up the search until one of the hits pierced my eyes like a pair of daggers. Her obituary.

Gay had passed a few years back, succumbing to cancer. The short listing mentioned two grown children but no husband. She had hurt me decades earlier. That didn’t matter now. Knowing she had died saddened me and generated a wave of nostalgia.

I opened the cupboard, found a fifth of gin – Gordon’s naturally – drank a shot in memory of the Good Time Girl and then put the bottle away. 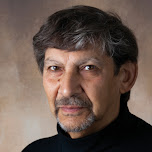 A resident of Albuquerque, New Mexico, Mark Fleisher has published three books of poetry – with some prose and photographs added. His work has appeared in numerous online and print anthologies in the United States, the United Kingdom, Canada, India, and Kenya. He earned a journalism degree from Ohio University and held reporting and editing positions with upstate New York newspapers. A U.S. Air Force veteran, Fleisher served in Vietnam as a combat news reporter and received a Bronze Star for Meritorious Service. markfleisher111@gmail.com