Puke on the Paradise 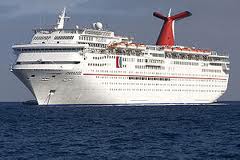 Four years ago, my buddy Steve won a three-day cruise to and invited me to come along.  We were to depart from , aboard the Carnival cruise ship Paradise of the Sea, arrive in , on Saturday morning, and be back in on Sunday.  Steve told me that one of the added features of the prize was that we were to receive unlimited drinks while on the ship.  So, it was our goal to drink more than the actual retail value of the cruise, which was about $375 each. 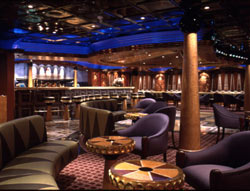 The ship took off at about 6:00 P.M. while all 2052 passengers and 920 crewmembers were poolside, on the Lido Deck, enjoying the Departure Celebration, a big shindig where everyone drinks fruity cocktails, wears leis and dances to a live band playing "Hot Hot Hot". By that time we were already halfway to Shitfacedville. As a matter of fact, we never even made it to the Departure party.  Instead, we found a nice quiet bar on the Promenade Deck where they served ice-cold Guinness and allowed smoking.  It was called the Rotterdam Bar and it became home base for the remainder of the trip.


Some time after 11:00 P.M., we decided that we should hit the late-night buffet and grab a piece of pizza, or a hot dog, or anything.  Just some sort of food.  We knew there was plenty more to drink and we didn't want to ruin a good time by getting sick.

As we were trying to find the buffet, we started talking with some older Armenian guys who were sitting at the back of the ship on a small deck that overlooks the Verandah Deck, where about four dozen couples were dancing under the stars and enjoying a romantic evening on the sea.  The Armenian guys had smuggled a bottle of Patron Silver onto the ship and were sneaking shots as they exchanged stories of their home county or whatever the fuck old Armenian guys talk about.  They offered us some of their Tequila and poured a shot for each of us into little paper cups.  We toasted, we drank, and I felt mine coming right back up.


I held up a finger - the international hand signal for "let me take this call," "I'll be right with you," or "I can't talk 'cause I'm getting ready to puke."  I excused myself and walked to the side of the ship, leaned my head over the railing and let loose.  Nothing but liquid, and lots of it.


It's funny, the things that you think about while barfing.  Like about the surface that you're throwing up on, or what kind of food is coming out of you, or about the noise that you're making.  At that moment I started thinking about the wind and how it was carrying my vomit down and toward the back of the ship.


I turned my head just in time to watch four dozen couples get a puke shower, stop dancing, and look up at me.

I quickly wiped my mouth on my sleeve, walked back over to Steve and the Armenian Guys, Thanked them again for the delicious Patron and told Steve "We've got to go. NOW."


It was dark, and neither Steve, nor the Armenian guys saw exactly what happened.  They just thought I got sick and wanted to go back to our cabin.  It wasn't until we were safely away from the back of the ship that I told Steve what happened. I purchased a sweatshirt and ball cap from the gift shop and put them on as a disguise and we headed back to the Rotterdam Bar to finish a long night of drinking.